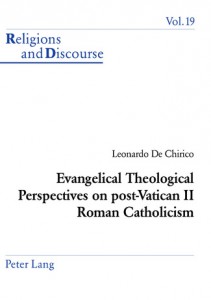 After describing the theological contours of Evangelicalism, the book critically surveys the works on Roman Catholicism by Gerrit Berkouwer, Cornelius Van Til, David Wells, Donald Bloesch, Herbert Carson, John Stott, and two on-going international dialogues between Evangelicals and Catholics. The Evangelical appraisal of Roman Catholicism has in general suffered from a lack of systemic awareness in dealing with it. The prevailing approach has been marked by an interpretative atomism, and the last two chapters propose the formulation of an Evangelical systemic analysis. First, by supporting the feasibility of the category of system as applied to Roman Catholicism, thus developing the basic theological hermeneutics proposed by Abraham Kuyper. Second, by indicating in the Roman Catholic articulations of the relationship between nature and grace and in the ecclesiological self-understanding of the Roman Church the two main theological foci of the system.

This is an essential resource for an Evangelical understanding of contemporary Roman Catholicism.

…the book is an excellent contribution to the process of constructive evangelical-Roman Catholic dialogue and critique but also to all those interested in applied Neo-Calvinist thinking.

It is a good, informative and worthwhile reading.

This book deserves to be widely read and circulated, for it makes a genuine and fresh contribution to current ecumenical affairs.

A Christian’s Pocket Guide to Papacy: Its origin and role in the 21st century

Who are the Popes and how does the Roman Catholic Church define their role? What about the present day Popes? What is the ecumenical significance of the Papacy and what are its prospects in the global world? These and other questions are tackled as Leonardo De Chirico explores the Biblical, historical, and theological fabric of the Papacy.

…Professor De Chirico investigate the phenomenon of Roman Catholic hierarchy using biblical exegesis, fascinating historical data, and basic theological insights to inform our view…engaging, clearly written, polemical in the best sense, and resolutely Scriptural, this is easily the best shorter guide for those wanting to know how to evaluate the institution of the papacy and related matters.

How readable! How fascinating! How important! This book is a page-turner. I kept thinking, “I have it, to whom can I give it?”…Right at the heart of Roman Catholicism there is this giant delusion. You don’t believe me? Then read this fascinating and brief book and think for yourself.

In terms of an introduction to the Catholic Church’s doctrine and exercise of the papacy, this book is unmatched! Read this book and you will gain essential insights into what for many Christians is a mystery, now unpacked by a trusted evangelical theologian and pastor.

Few evangelicals will wish to read a long book about Popes, but here is a marcellously short one which will serve us well in conversing with Roman Catholic contacts and in understanding a significant religious celebrity of the modern world

De Chirico’s book is excellent. Not only is it well researched, thorough, and clear, its lessons hold crucial importance in this historical moment. In a day when the pope is featured on the cover of Time magazine and when unchurched pundits use phrases like “the Francis factor” (speaking of Pope Francis’s popularity in the mainstream), it’s important for us to have an informed perspective on the papacy. This volume, more than any other I’ve read, provides such perspective and therefore should be added to one’s bookshelf

I am pleased to announce the publication of my new book. Make sure you get a copy!

A Christian’s Pocket Guide to Mary: Mother of God? 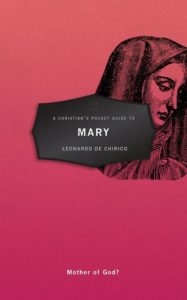 The Bible is full of inspiring characters and astonishing events. But, although Mary has without question one of the most wonderful stories, she can often be ignored – to be remembered only once a year at Christmas. This Pocket Guide title looks at the life and character of Mary – and her unique significance in the gospel story.

Leonardo De Chirico, one of the leading evangelical thinkers on Roman Catholicism, including its post-Vatican II phase, knows all the ins and outs of the history and theology of Catholicism, from years of study and first-hand experience in Padua and Rome. Against the temptation to think Mariology is just a side-show in Catholicism, he shows how it fits hand in glove with the Roman Church’s doctrine of grace.

This is the book I have been searching for! De Chirico’s A Christian’s Pocket Guide to Mary is unique in clearly and succinctly bringing together in one place Mary in the Scriptures and Mary in the history of Christian thought and practice, right up to the present day.

-Rachel Ciano, Lecturer in Church History at Sydney Missionary and Bible College; church-planter in a multicultural, urban area of Sydney.

Never before have I read a more masterfully written book on the subject. Leonardo De Chirico marries scholarship with an easily readable style that makes the book extremely useful both for personal and group studies. It is a concise and well researched masterpiece from one of the world’s leading experts on Roman Catholicism and recommendable both to Catholics and Protestants who want to understand one of the most misunderstood and controversial issues in Church History.

-José Hutter, Chairman of the Theological Commission of the Spanish Evangelical Alliance

Leonardo De Chirico is one of my most trusted authorities on Roman Catholic doctrine. He has gained my confidence because he is always equally charitable, winsome, and well-informed. In this short book he demonstrates what the Roman Catholic Church teaches about Mary and aptly proves why so much of it is opposed to the plain teaching of the Bible. I heartily commend it to you. 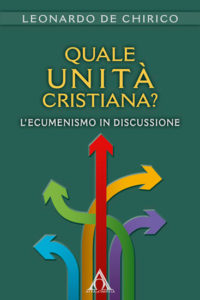 We use cookies to ensure that we give you the best experience on our website. If you continue to use this site we will assume that you are happy with it.OkNo
Revoke cookies