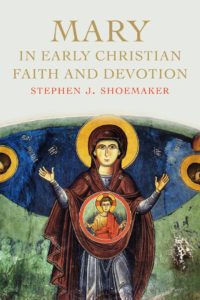 At the end of September 2018, in the midst of the Annus Horribilis of the Roman Catholic Church (with the explosion of sexual abuse cases and the growing spiral of inner conflicts within the curia), Pope Francis called his people to devote themselves to praying to Mary to ask for her protection.[1] He asked the faithful to conclude the Rosary with the ancient invocation Sub tuum praesidium (“We fly to thy patronage”). The full Marian invocation is recited as follows:

We fly to Thy protection, O Holy Mother of God. Do not despise our petitions in our necessities, but deliver us always from all dangers, O Glorious and Blessed Virgin.

The prayer contains references to attributes and prerogatives that in the Bible are clearly and exclusively relegated to God, e.g. His protection, His acceptance of our petitions, His ability to deliver, and Him being both glorious and blessed. And yet, this Marian prayer ascribes all of these functions to Mary and her protective mantle. Where does this prayer come from? And why is it part of the liturgical and devotional life of the Roman Catholic Church now?

The Growth of Mariology
A well-documented and scholarly answer comes from the book Mary in Early Christian Faith and Devotion (Yale University Press) by Stephen J. Shoemaker. Shoemaker traces the complex historical process that saw the Mary of the Bible become the Mary of manifold devotions in the first five centuries of the Christian era. The book maps out the growth of Mariology well beyond the “laconic” (62) portrait of Mary that is presented in the New Testament. Even stretching the focus to the second century, Mary certainly becomes the “new Eve” for Church Fathers like Justin Martyr and Irenaeus, thus seeing her role expanded to a useful corroboration of the Pauline parallel between Adam and Christ (the new Adam). However, there is no indication of any devotions attached to her. For these Fathers, “Mary seems to be a figure primarily of dogmatic rather than devotional concern” (47). Moreover, Shoemaker helpfully makes reference to a later Father like Tertullian who has a “lower esteem” for the mother of Jesus than other contemporary orthodox writers (65).

While “there is practically no evidence of any Christian devotion to Mary prior to 150 CE” (3), a first boost to the process came from the Protoevangelium of James, a late second century biography of Mary. Here she becomes “the epitome of sacred purity, as perfect holiness embodied in a human being” (60). Particular stress is put on her virginity that is “an emblem of her own sacred purity” (62) rather than a sign of the divine origin of the Son. Mary’s holiness becomes a dominating feature that attracts devotional attention on herself as an exceptional person. In a telling comment, Shoemaker argues that the Protoevangelium – therefore an apocryphal gospel – laid “crucial foundations for future devotions to the Virgin Mary” (53). For evangelicals wanting to ground spirituality on the canonical Scriptures, this in an important point to underline. Historically speaking, Marian devotions were fueled by writings that were never considered to be inspired, and yet have played a formidable role in generating the Marian cult.

A Heterodox Backdrop
This is the background out of which the Sub tuum presidium prayer comes from. According to Shoemaker, this 3rd century Egyptian papyrus suggests, “Marian piety initially emerged within a more popular and less culturally elite context” (70). Moreover, the fact that the prayer does not mention the Father or the Son may indicate that it may have been linked with “heterodox groups within early Christianity” (72). The spurious lex orandi negatively influenced the subsequent development of the lex credendi. The fact that the highest Roman Catholic authority still uses this prayer shows how deep the impact has been.

The central chapters of the book are dedicated to a fascinating analysis of an important source such as The Book of Mary’s Repose, which opens the tradition of the Dormition narratives. Here, Mary is revered for “her knowledge of the cosmic mysteries and her influence with her son” (128) and capable of receiving intercessions, performing wonders, and making apparitions. The heterodox backdrop of the tradition depicts Jesus as the Great Cherub of Light, a typically gnostic title. The Six Books Dormition Apocryphon reinforce this insurgent tendency of making Mary the center of a proper cult.

Shoemaker also sheds light on the additions of roles given to Mary (e.g. the “ascetic model” strongly supported by Ambrose) and the liturgical evidence for the cult of the Virgin in terms of feast days, festivals, and hymnography. Here again, the lex orandi of ancient Christianity was “a bit ahead of its lex credendi” (194).

The lex credendi did arrive with the dogmatic pronouncement of Mary as the Mother of God at the Council of Ephesus, a “major turning point” in the history of Marian piety (205). The final chapter contains a fascinating examination of the Mariological elements undergirding the historical context, the theological debates, and the ecclesiastical outcomes of the Council of Ephesus. The point convincingly made by Shoemaker is that Marian piety was already present and strong before the Council and was one of the principal reasons why Nestorius was rejected by the party lead by Cyril on the theological side and by Pulcheria on the devotional side. The series of sermons by Cyril that followed the conclusion of the Council “went well beyond mere Christological concerns in its exalted praises to Mary” (225). Nestorius’ Christology was certainly in need of further refinement, but he was at least right in foreseeing the explosion of devotion to the Virgin that would follow the proclamation of her as the Mother of God.

Mariology: An Evangelical Analysis
The historical and literary evidence persuasively presented by Shoemaker shows that Mariological devotions originated in heterodox (read: gnostic) milieux and were later theologized and integrated into the corpus of the Mariological doctrine of the Church (6). The book stops at a careful historical analysis, but the evangelical theologian wants to go further in saying something more that is backed up by historical evidence. Contrary to the idealized Roman Catholic view of the development of doctrine as an organic unfolding of the truth (from J.H. Newman onward), Mariological ideas and practices were added from the outside and allowed to penetrate the faith of the people. While Church Fathers like Irenaeus were painstakingly fighting against the heresies of Gnosticism in order to protect the integrity of the Christian faith, other sectors of the church were being infiltrated by gnostic deviations through Marian devotions. Gnostic influences that were thrown out of the door of theology re-entered through the window of devotions, without the church as a whole exercising enough biblical discernment to understand what was happening. Unfortunately, the lex orandi (in this case soaked in Gnosticism) eventually affected the lex credendi (which did not have enough biblical antibodies to reject them).

Back to Pope Francis. When he called his people to pray the Sub tuum praesidium Marian invocation, he referred to an ancient tradition that the Roman Catholic Church has assimilated and made its own. As has been the case from the late second century onward, “Marian devotion and doctrine continue to be driven largely by popular piety, to which the hierarchs and theologians largely respond” (239).