What defines Roman Catholicism? Is there something that qualifies not only parts of it, but the whole of what Roman Catholicism stands for? Is there a core element that shapes all components in a distinct way? On this question, scores of heavyweight theologians have written masterful analyses over the centuries and up to this day. From John Henry Newman to Romano Guardini, from Adam Möhler to Karl Adam, from Hans Urs von Balthasar to Henri de Lubac, from Avery Dulles to Walter Kasper, dozens of books have tried to identify what makes Roman Catholicism what it is. Despite the different suggestions provided, the common assumption is that Roman Catholicism is an interconnected whole and that its identity is pervasively present – though with different intensities – in all its expressions. 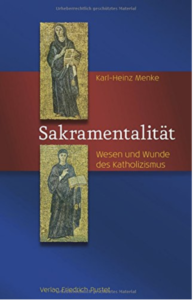 The latest attempt to identify the theological DNA of Catholicism comes from the pen of Karl-Henzi Menke, professor of theology at the University of Bonn and one of the most authoritative voices of present-day Roman Catholic theology in Germany. His book Sakramentalität. Wesen und Wunde des Katholizismus (2015) (English: Sacramentality: The Essence and the Wounds of Catholicism) exactly tackles this issue and is a useful new contribution to the whole discussion.[1] A full review of the book is beyond the scope of this short article, but at least two points are worth exploring.

The Christian faith is not a jumble of single truths: here a dogma, there a dogma, here an exegetical point, there a moral norm, etc. Faith is rather a structured and coherent whole. This has important consequences for the inter-confessional theological dialogue: in the end it is of little use to talk from time to time (only) about individual topics and to seek consensus about them, rather one must ask: what is the ultimate reason for the different view about this or of that single theme? If we proceed in this way, we will come across an ultimate diversity in the overall conception of revelation, a diversity that is concretized in the various individual categorical differences. This means that among the individual confessions, in the final analysis there are no differences but there is a fundamental difference which then unfolds in a series of differences. (p. 12)

Since the context of this argument deals with the differences between Roman Catholicism and the Protestant faith (although he has primarily in mind liberal Protestantism), there are several points to be highlighted here: 1. Faith is a “structured and coherent whole”; 2. The dialogue between Evangelicals and Catholics must seek to identify the ultimate motif of the respective faiths and conduct it accordingly; 3. This ultimate motif is apparent in all expressions of theology and practice; 4. The difference between confessions (i.e. Roman Catholicism and Protestantism) is traceable to a “fundamental difference” that unfolds in a “series of differences”.

It is important that Roman Catholic theologians of this caliber suggest such a clear view of what is at stake. Often times, people who are involved in ecumenical dialogue show little awareness of the “systemic” (my word, not Menke’s) nature of one’s own faith and the other’s. The popular version of this superficial approach is when it is argued that as far as Evangelicals and Catholics are concerned, “we agree on Christology, we disagree on soteriology and ecclesiology”, or “we agree on the Trinity, we disagree on Mary”, as if theology were made of a bunch of isolated pieces. If we follow Menke and Greshake, it is not theologically feasible to hold such an “atomistic” approach (again, my term, not Menke’s), as if doctrines were disconnected bits and pieces. On the contrary, the Roman Catholic views of salvation, the church, and Mary are shaped around Roman Catholic accounts of the Trinity and Christ. Doctrines and practices cannot be disjoined as if they were independent silos, but must be seen as mutually influencing one another. In other words, Roman Catholicism is a coherent and unified whole, and therefore must be seen as stemming from the “overall conception of revelation” that leads to an “ultimate diversity” with regards to the Evangelical faith.

There are three sides to his understanding of sacramentality:

The point is that Roman Catholicism has its core in the interconnection between Christ and the Church, between Christology and ecclesiology. Everything else stems from this “essence” that makes Christ and the church co-inherent and their relationship sacramental. The sacramentality of the Roman Church does not entail the seven sacraments only, but the whole of the Church in its self-understanding, life, and practices.

There are far-reaching consequences for an Evangelical assessment of Roman Catholicism. Among other things, this means that the “essence” of Roman Catholicism is its account of Christology, and therefore the Trinity, and the way in which it shapes the broad reality of the Church. This is not a secondary issue. It lies at the heart of the faith: the Roman Catholic account of the person, the work, and the doctrine of Christ. The problem of Roman Catholicism does not primarily lie in its Mariology, its unbiblical folk devotions, or in papal infallibility. These, and many others, are all variations that arise from the ultimate difference that has to do with the account of Jesus Christ himself and his relationship with the Church.

[1] I had access to the Italian translation: Karl-Heinze Menke, Sacramentalità. Essenza e ferite del cattolicesimo (Brescia: Queriniana, 2015). Quotations will be taken and referenced from this translation.